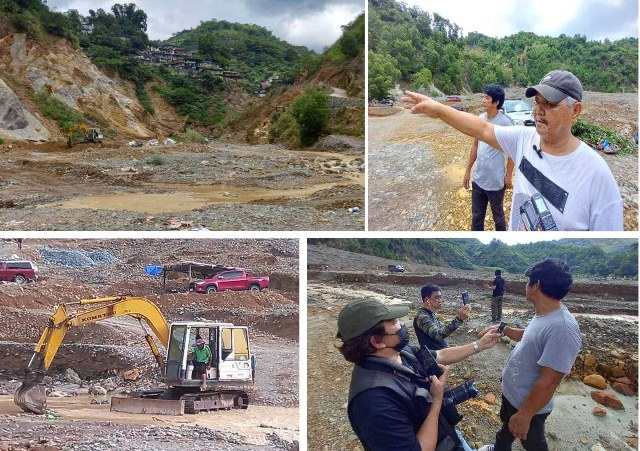 Proposed site of a one-lane bridge near an open pit located in Sitio Luneta, Loacan-Antamok, Itogon, a patented mining claim by  Benguet Corporation. Lawyer Froilan Lawilao says it’s due for implementation as duly approved by the Mine Rehabilitation Fund Committee (MRFC). Fund source will come from the Care and Maintenance budget of the private company, and works will be undertaken by the local community. INSET OPEN PIT. A backhoe, acquired by Luneta Miners Association (LMA) seen clearing and filling up an area for a temporary safe access way.     Years, villagers,   pocket miners belonging to LMA, their families, and travelers have been clamoring for a bridge for their general welfare and safety.  Photo courtesy of Primo Agatep (Contributor)

BAGUIO  CITY–    Benguet Corporation has allocated funds for the immediate construction of a bridge near its abandoned mining patented claim area near an open pit in Sitio Luneta, Loacan-Antamok, Itogon.

Lawyer Froilan Roger Lawilao, BC Administration Department Manager on Wednesday (Aug. 3), assured that there is existing funds for the construction of a one-lane concrete bridge with an estimated length of 400 meters.

“It is due for implementation, “ Lawilao said.

The BC official said, the fund is sourced from their company’s Care and Maintenance budget, however, the latter did not mention the specific amount to be used for the construction of  said bridge.

Reports said that Benguet Corp. revenues more than doubled to P3.8 billion in 2021 from P1.6  billion previously while operating income quadrupled to P1.6 billion from P340 million despite restrictive quarantine and strict government health protocol policies, and also due to strong metal prices and favorable market conditions amid the pandemic.

Benguet Corp. acknowledged the fact that residents of Sitio Luneta needs the bridge so that they will not be isolated when a portion of the area (open pit) gets flooded from the cascading waters coming from upstream of Antamok River, especially during wet season.

When constructed, local residents will have easy access to transporting food supplies and patients with emergency cases. And it will safeguard everyone especially school children against dangers in crossing the open pit area.

Lawilao clarified that the funds have been existing for years.

He further explained that the construction of the bridge will have to be undertaken by the community purposely to generate local employment.

The BC official added that the project was approved by the Mine  Rehabilitation Fund Committee (MRFC) after a series of works by the so-called BC-Multipartite Monitoring Team (MMT),  composed of representatives from the private mining firm, community, local government unit (LGU) and non-government organization (NGO), among others.

Lawilao said the area is a patented mining claim of BC, and its mining operation (Antamok) was suspended/abandoned mainly due to low grade of metals and the price of metals were not as competitive during late 90s.

Currently, BC is awaiting the approved final mine decommissioning and rehabilitation –its Antamok open pit.

John Latongan, president of Luneta Miners Association (LMA), former board of director of the Benguet Federation of Small-Scale Miners, Inc. (BFSSM), has welcomed this development as he expressed his gratitude to BC on behalf of the residents in their community,  pocket miners and their respective families living in the mining area.

“ We are thankful to the company (BC) for addressing our concern- the construction of a bridge. This has been our clamor for years,” Latongan said in the vernacular.

“It’s true for a fact that  BC has been extending assistance to us in many ways, and that we are grateful, which include social and environmental projects, providing us seedlings in our regular tree planting efforts under the reforestation program of BC, “ Latongan added.

“Social responsibility and environmental protection  are among the core values of  Luneta Miners Association (LMA),”Latongan stressed

“Dakkel iti panagyamam mi ti Benguet Corp., “Latongan said, adding ever since their elders were employed in the company during its early years of operation. He further said the company has given them – people of their community great opportunities-education, economic and living conditions improved.

For the other appeal by the same community and LMA – the repair or construction of dike, and retaining walls along the Antamok River banks,  just a few meters away from several houses, Lawilao said, they have to assess the area following government rules and regulations.

And it will undergo the same process by  BC-Multipartite  Monitoring Committee and approval shall come from the MRFC. # Contributed by Primo Agatep