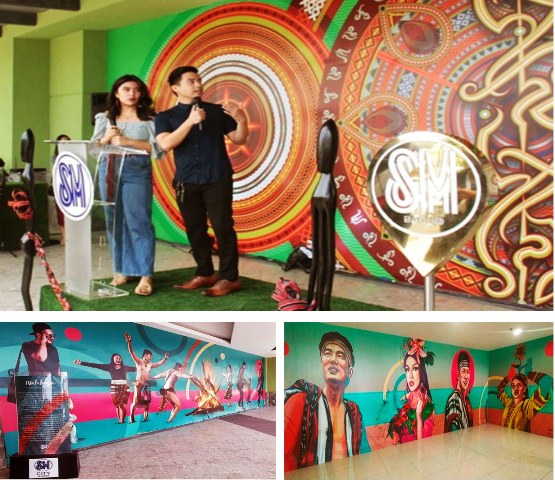 NalaBAGA, more widely known as Red, is the prominent and unifying color of Cordilleran weaving. The weaving is a symbol of our connectedness as a people, and through these connections, we tell our stories; iBAGA mi storya mi. Through these artworks, we hope that you feel the warmth and passion for our culture; ang nagbaBAGAng pag-ibig sa ating kultura.

NALABAGA MURALS – Through the Hila-bana and CalligraFilipino artworks, we provide our own artistic interpretations of Cordilleran culture, from traditions to textiles.

The textiles, through the eyes of Taipan Lucero, highlight the colors and weaving patterns, accompanied by the artistic calligraphy of our ancestral script that spells “Pilipino”, signifying our vibrant, dynamic culture intertwined in both our individuality and collectivity.

Cañao or Kanyaw is a sacred ceremony or service done by the Cordilleran indigenous identities as an emblem of gratitude. This rite is done in endeavors where the act of prayer is crucial. This involves the offering of animals, food, and other material possessions as told by the mambunong or the native priest to appease the spirits.

The mural visualizes a scene of a modern-day Kanyaw where local faces of different roots are gathered around a bonfire celebrating one thing- the Filipino Identity. Derived from the Hila-bana street art movement, the red thread serves as a visual guide to plot the traces of the self and identity. It also weaves the narratives of the featured subjects as they simultaneously experience an aspect of a culture that creates a feeling of belonging and purpose.

And with that, we invite you to be part of our artwork. These murals are created to serve as backgrounds for photographic interactivity, wherein you yourselves can be embedded in the art. As you, hopefully, may enjoy posing with the art, we wish that you may also impart a stronger sense of appreciation for our culture to your loved ones.

She established a street art movement entitled Hila-bana, which magnifies real-life stories of Filipino cultural advocates of different ethnolinguistic groups unified by a red thread. This thread serves as a catalyst to weave a cultural tapestry that delineates our connected presence with global cultures. This movement has gained national and international traction validated by the National Commission for Culture and the Arts, supported by Davies Paints Philippines and the Search Mindscape Foundation.

She is also the co-founder of 23 Sampaguita Artist Collective and the purveyor of Sining Eskinita, a multi-sensorial street art festival with a primary goal to champion artists from all disciplines to establish the streets as instant institutional grounds for creative development and provide universal access to safe, inclusive, and culturally uplifting public spaces.

Eventually working as the only Filipino designer in a company in Kobe, Japan, he experienced firsthand learning Japanese Calligraphy or Shodo, the immense love and respect the Japanese show for their culture. Inspired by this, he quit his job and went back home to start CalligraFilipino.

CalligraFilipino, a portmanteau of Calligraphy and Filipino, is his art and advocacy that celebrates pre-colonial writing and traditional Filipino culture; combining his self-developed Baybayin writing with traditional elements such as the colorful Okir of the Maranao, the radial design pattern of Kulintang, among others.

His works have been showcased locally and internationally and have been constantly featured by mainstream outlets on print, radio, television, and new media, both here and abroad. As a supplement to his art, he delivers talks for academic institutions as well as local and international conferences. ###