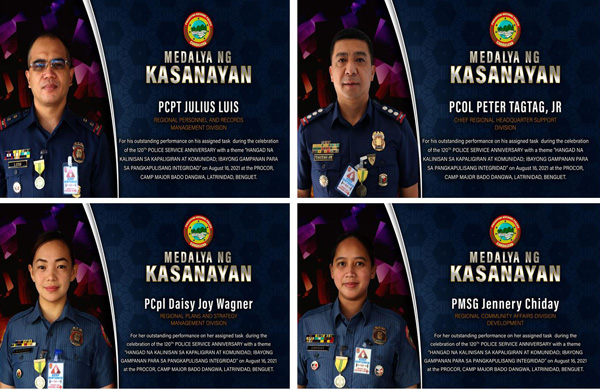 PROCOR Regional Director, PBGEN RONALD OLIVER LEE, led the presentation of awards during the ceremony. He was assisted by the command group.

The Medalya ng Kasanayan (PNP Efficiency Medal) was awarded to PCOL PETER TAGTAG, JR for his outstanding performance as the Chairman, Committee on physical arrangement and reception during the celebration of the 120th PNP Service Anniversary.

In line with the Intensified Cleanliness Policy (ICP) of the Chief PNP, a Certificate of Recognition was awarded to the Regional Logistic and Research Development Division (RLRDD) for being adjudged for the second time as the cleanest office for the week during the surprise inspection conducted on August 16- 20, 2021 (PROCOR-PIO)