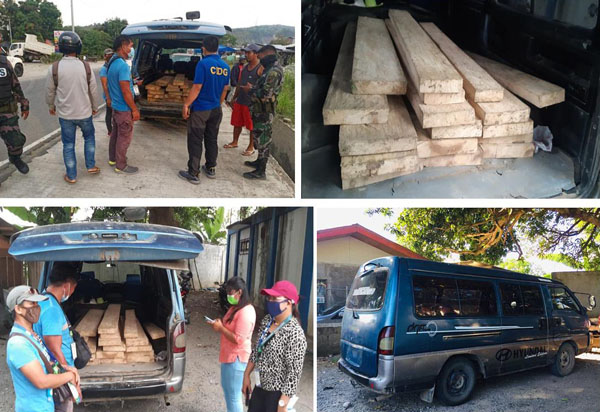 Camp Major Bado Dangwa La Trinidad Benguet- (May 4, 2021) – two (2) individuals were arrested for illegal logging in a checkpoint by joint operatives of CIDG and Kalinga police in Tabuk City, Kalinga in the afternoon of May 2, 2021.

Based on a report sent to PBGEN RONALD OLIVER LEE Regional Director of PROCOR, the suspects were identified as Manny P Masadao, 21, and Alfonso B Masadao, 49, both farmers in Tabuk City.

According to the CIDG Kalinga/Apayao, they received a call from a concerned citizen regarding possible transportation of logs coming from the municipality of Pinukpuk. This prompted them to coordinate with the Tabuk City Police Station for a joint checkpoint operation.

During the conduct of checkpoint, personnel flagged down a blue Hyundai Grace Van after noticing some lumbers at the back of the vehicle.

When inspected, they failed to show any pertinent documents or permit issued by the DENR that resulted in their arrest.

Confiscated from them were 17 pieces of Melina lumber with a total of 213 board feet with a market value of Php10, 650 and the Hyundai Grace Van bearing a plate number LFT 972 used for the supposed transportation of the lumbers.

Arrested suspects were brought into the custody of Tabuk City Police Station for the filing of appropriate charges while confiscated lumbers were properly turned over in the office of DENR Tabuk City for documentation and proper disposition .(PROCOR RPIO)