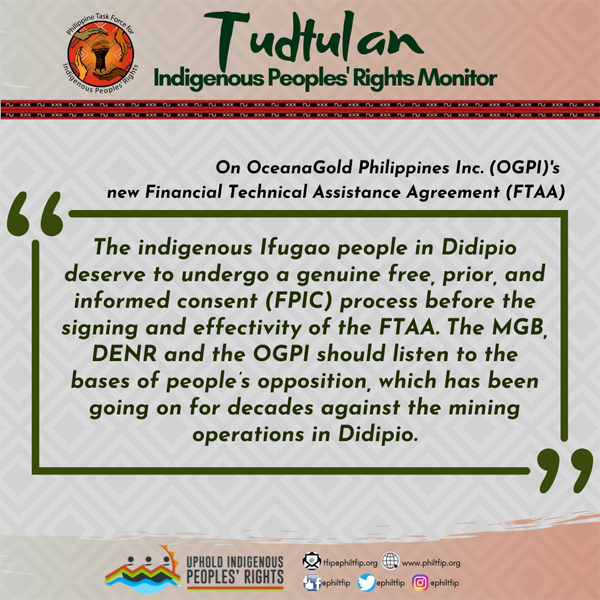 The Philippine Task Force for Indigenous Peoples’ Rights expresses alarm over the finalization of the Financial and Technical Assistance Agreement (FTAA) renewal of OceanaGold Philippines Inc. (OGPI).  A news report revealed that the national office of the Mines and Geosciences Bureau (MGB) has already finalized a new FTAA for OGPI and is awaiting the signature of DENR Secretary Roy Cimatu and finally, President Duterte.

The MGB’s decision can only mean that it has turned a deaf ear to the clamor of the farmers and indigenous peoples in Nueva Vizcaya who have had enough of the hardships and destruction brought about by OGPI’s two decades of operation. Since June 2019, the Ifugao farmers in Didipio, concerned citizens and even the provincial government of Nueva Vizcaya have resolved that OGPI should cease its operations and leave the province. The reason for this is not only the expiration of the company’s FTAA but also its dismal record of environmental destruction and violation of human rights against members of the host community.

The indigenous Ifugao people in Didipio deserve to undergo a genuine free, prior, and informed consent (FPIC) process before the signing and effectivity of the FTAA. The MGB, DENR and the OGPI should listen to the bases of people’s opposition, which has been going on for decades against the mining operations in Didipio. We stand by the community people who are asserting their rights to the land even though they are technically migrants there. The Bugkalot were the original inhabitants in the area who had left and transferred to other areas at the time when the Ifugao migrated. The Bugkalot did not come back nor did they take back the land where the Ifugao settled. Therefore, as indigenous peoples and as settlers who have occupied and gained stewardship of the land for more than 50 years, they have the right to FPIC. All operations should stop until consent is given by indigenous peoples in Didipio.

Further operations of OGPI in Didipio could only mean more disasters not only for the indigenous peoples, but many other people in Nueva Vizcaya, Quirino, Isabela and Cagayan provinces. The site of OGPI operations is situated within the Magat Watershed, which feeds the Magat River, the largest tributary of the Cagayan river. The Cagayan River flows through all of the provinces mentioned and thousands of farmers depend on it for their livelihood. OGPI’s destructive mining operations will surely damage this whole river system and watershed.

The peoples in Didipio and Nueva Vizcaya have presented their case against the renewal of OGPI’s FTAA. Again we challenge the Duterte government: Save and preserve lives, do not destroy them!

OGPI, out of Nueva Vizcaya! Uphold the rights of the Ifugao farmers in Didipio! Uphold Indigenous Peoples’ Rights! 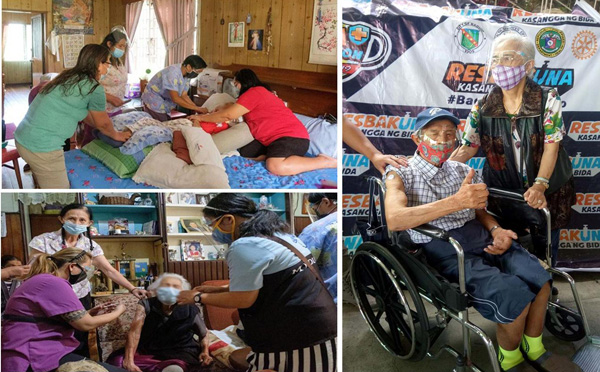 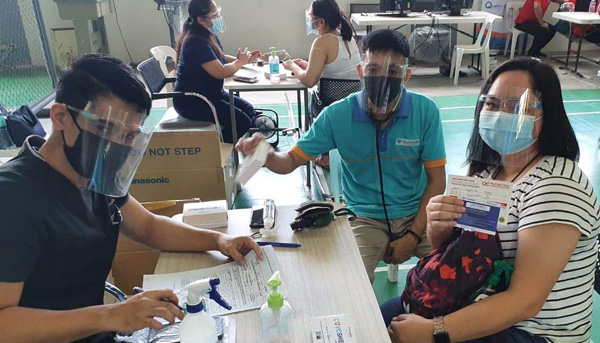