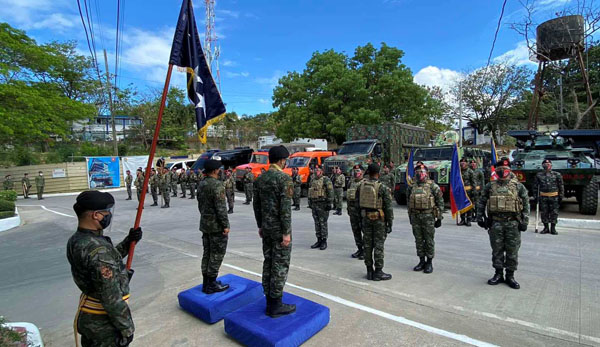 MAY THE FORCE BE WITH YOU: PNP Chief Gen. Guillermo Lorenzo T. Eleazar presides the change of leadership at the Special Action Force between outgoing SAF Director PMGEN Bernabe Balba and newly-designated SAF Director PBGEN Felipe Natividad at the SAF Headquarters at Camp Bagong Diwa in Taguig City on Wednesday, March 12, 2021. In the ceremony, PGEN Eleazar lauded SAF for continuously being the face of courage, integrity and discipline of the PNP: “The Special Action Force is the representation of what is the best of the Philippine National Police.” file photo PNP-PIO

Eleazar presided on Wednesday, March 12, the turnover of command between outgoing SAF Director Police Maj. Gen. Bernabe Balba, who was designated as the new director of the Directorate for Integrated Police Operations-Visayas, and Natividad at the SAF Headquarters at Camp Bagong Diwa in Taguig City.

In his message, PGEN Eleazar expressed confidence that Natividad would lead the elite force with professionalism and high integrity in battling terrorism, insurgency, crime groups, and other high value target criminals.

“I am confident that under your leadership, the SAF will maintain its earned reputation of being the most dependable and highly-specialized force that aims to ensure peace and order across the country,” PGEN Eleazar said.

PBGEN Natividad is known for his role in running after a small group of Abu Sayyaf Group which landed in Bohol to conduct kidnapping and other terrorism activities. He was then the Police Provincial Director of Bohol.

PGEN Eleazar also expressed gratitude to PMGEN Balba for his contributions to improve the operational capability of SAF not only in the field of law enforcement, anti-insurgency and anti-terrorism operations but also in disaster relief and response.

PGEN Eleazar also urged each and every member of SAF to remain focus on its role of maintaining peace and order in the land, citing that its operational capability was further enhanced with the full support of President Rodrigo Roa Duterte who was instrumental in the purchase of brand new helicopters and recruitment of more SAF commandos to form new battalions.

“The Special Action Force is the representation of what is the best of the Philippine National Police,” said PGEN Eleazar.