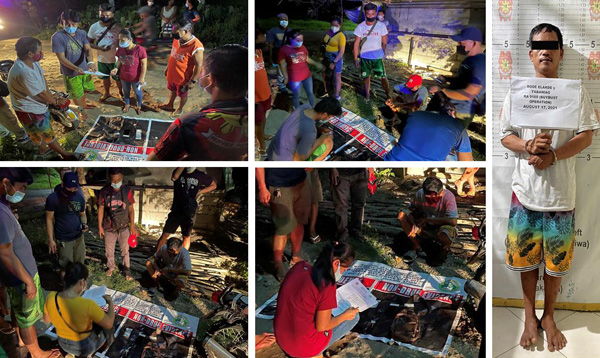 A High-Value Individual (HVI) was arrested in a buy-bust operation conducted by joint operatives of Kalinga PPO and RID/RSOG at Purok 1, Agbannawag, Tabuk City, Kalinga on August 17, 2021.

Elarde was arrested after he sold to an operative acting as a poseur buyer one (1) heat-sealed transparent sachet containing suspected shabu weighing more or less 0.2 grams with Standard Drug Price (SDP) amounting to Php 1,360.00.

During the course of his arrest, seized from his possession were buy-bust money, cellular phone and one TMX 155 motorcycle used in the transaction.

Onsite markings and inventory were conducted in the presence of the suspect and witnessed by Kagawad Giovannie Tomaldong of Barangay Agbannawag; media representative, Ms. Melisa Guavez; and Ms. Lailanie Balao-ing from the DOJ.

The arrested suspect and confiscated pieces of evidence were brought to Tabuk City Police Station for documentation prior to turn-over to Kalinga Crime Laboratory Office for Qualitative and Drug Examination while a case for violation of RA 9165 or The Comprehensive Dangerous Drugs Act of 2002 is being prepared against the suspect. (PROCOR-PIO)